Tomorrow it will be six months since you came into our world.  You are our happy and cuddly little man. You are relaxed and content, just happy to sit back and take in the chaos around you.

I love watching you laugh and smile at your big brother 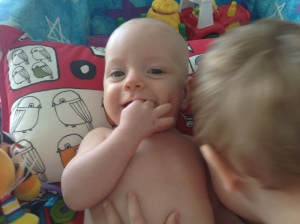 I love the time we spend together, just the two of us 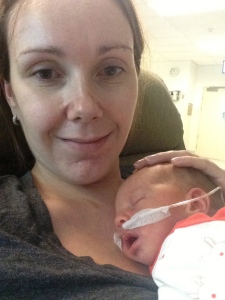 I love that you need me

I love that you are with us

You have come so far over the past six months, and I love seeing more of your little personality coming through. Although in some ways I feel like I am grieving the newborn phase.

I miss our special, quiet moments during the night when it was just the two of us awake.

I miss your happy and contented face as you would drift back to sleep with a full tummy.

I even miss the times when you would wake up just for a cuddle, when all you wanted was your Mum.

There are no words special enough to describe the joy and love you have bought our family.  My heart swells when I hear you cheeky little laugh, when you grab hold of my finger and simply when you stare into my eyes and smile.

We love you Aiden 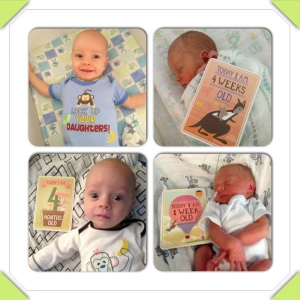 Linking up with Essentially Jess for IBOT

Reaching 20 weeks is a major milestone in pregnancy.  You’re ‘halfway’ through, you have a scan to check on bub (and find out the sex if you can’t wait like me!), the excitement builds and you start preparing for the arrival of your special baby.

If you are at risk of premature birth, this can change, with the arrival of 20 weeks bringing you all the more closer to the 24 week milestone, otherwise known as ‘viability’.

It feels like such a cold and clinical way to describe your baby.  However it is at this point that most Doctors and Hospitals will go ahead with lifesaving measures to help your baby survive (although I have heard of some babies being treated at 23 weeks).

We were introduced to the term viability during our first pregnancy, when I was admitted to hospital at 20 weeks.  In a short space of time, we went from being blissfully unaware of the complications which can occur during a pregnancy, to discussing how much further along I would need to be before I would be given steroid injections (to help our babies lungs), and at what point they would perform ‘life saving measures’ on our babies.  For us, we fell short of the ‘magic’ 24 weeks, with our daughter and son being born just shy of 21 weeks.

Knowing from the outset of our next pregnancy that it was going to be high risk, and the risk of another premature delivery was there, our goal was 24 weeks.  I started counting down the days to this milestone from the time our pregnancy was confirmed. We didn’t tell many people that I was pregnant, initially I didn’t want anyone to know until we were past that 24 week mark.  Then after numerous hospital admissions starting at 17 weeks, we started to share our news, with the thought that if something did happen to our baby, we wanted people to know about him, and acknowledge him.

I reached 24 weeks with the celebration being marred with the news I would be staying in hospital until Liam arrived.  We knew all the stats. We knew each week the chances of Liam surviving if he arrived early increased, as the chances of him developing a disability decreased.  We toured the Neonatal Intensive Care Unit (NICU) and Special Care Nursery (SCN).  I met with lactation consultants who educated me about expressing and feeding a premature baby.

We thought we were prepared.  We weren’t.  When Liam arrived at 30 weeks + 6 days, he was quickly shown to us and whisked away.  It wasn’t until several minutes later that we could hear his faint cries, and while I couldn’t see him, and was straining to hear, that small sound bought me to tears – our baby was alive.

There were similar feelings when I became pregnant with Aiden.  Again the countdown to 24 weeks started, with this milestone coinciding with Easter, I again eagerly counted down the days, with a strange mix of apprehension and relief as the day drew closer. Then when I was still pregnant (and at home!!) at 31 weeks, we celebrated…  thinking it may be possible that I could go close to full term! Like our babies, our celebration was premature.  Four days later I was back in hospital – just two doors up from where I’d stayed prior to having Liam, and chatting with the midwives who had previously looked after me.  The sense of deja vu continued, when Aiden was born at 32 weeks + 1 day – we were in the same theatre, our same obstetrician, the same ob assisting and the same anethatist.  This time, Aiden cried when he was delivered (and also weed all over me!), and we got to spend a few seconds more with him before he was taken to NICU.  Being thrown back into the NICU/SCN world after only leaving it 16 months before felt like we had never left.  As soon as I walked onto the floor, the smell of the NICU hits you and all of the memories come flooding back with a huge force.

We are fortunate, we had relatively smooth journeys with both of the boys during their NICU/SCN stays and there are no long term issues that we are aware of.  Once home, there have been the odd bumps in the road, and the anxiety of having a prem baby/child never fully goes away.   You are often anxious, are they putting on enough weight, is their development delayed, will a simple cold put them back into hospital? Often this isn’t helped by well meaning people,  who will compare their full term child’s development with yours or strangers who comment on how small your child is, when they ask how old they are, and when you say they were born early they go so far as to ask what the cause of their prematurity was – I was once asked ‘what was wrong with you?’ by a complete stranger whilst shopping with Liam in Woolies.

Today is World Prematurity Day.  The aim of today is to raise the awareness of premature birth and the journey families go on not only whilst their little ones are in hospital, but often for the rest of their lives.  It is a day to celebrate our little fighters and an opportunity to remember those babies who didn’t survive, by lighting a candle at 7pm.

Today I will be giving our little miracles extra hugs, and reflect on the long and crazy journey we have been through to have them here with us.  We will also be lighting a candle tonight in memory of Amber and Riley, and all the other babies who were born too soon and taken from us.

Have a wonderful Sunday 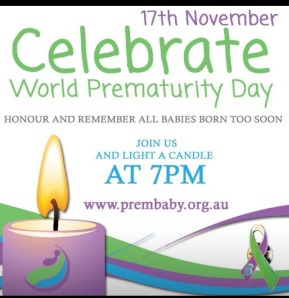 Linking up with the Multitasking Mummy for Mummy Mondays

Traveling is stressful.  Traveling with a toddler and baby can be very stressful…  It’s not only the stress of getting yourselves to the airport and settled on the plane, but it is also the stress that strangers can put on you.

If you have travelled with kids beofre, you know all about the look…   You know the one where they stare at you with two kids and grimace, hoping you will not be sitting anyway near them. Then there are the eye rolls and stares you get if one of your kids dare to grizzle or make a sound.  When you are getting these looks BEFORE you even get onto the plane, and you actually overhear people commenting how they are hoping you are not sitting near them it’s a little off putting to say the least! 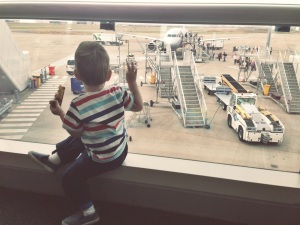 Over the weekend I had the pleasure (not sure if that is the right word?) of flying to Melbourne with both of my boys for the first time.  Liam was a frequent flyer when he was younger, but hasn’t flown since he started walking and it was Aiden’s first trip.  I wasn’t too worried about Aiden, how I was going to occupy Liam and keep him happy was my big worry. Talking to others who have flown with toddlers I was given a lot of advice from feeding them lollies and giving them an iPad to play with to giving them phenergan so they sleep. Whilst a sleeping toddler sounded enticing, I decided against ‘drugging’ Liam and came up with a plan to keep him happy and occupied for the 2 1/2 hour flight.

My top tips are:

I’m pleased to say the trip went well. The boys were fantastic with Aiden sleeping for most of the trip and Liam keeping himself amused until he fell asleep as we began to descend into Melbourne.  When getting off, I admit I gave a few smug looks to the couple I had overheard talking about us at the airport!

We are heading back home in a couple of weeks, and I’m hoping to have another smooth trip – what are your traveling tips? 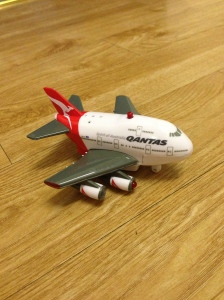 Linking up with the Multitasking Mummy for Mummy Mondays

Little Aiden has sure mastered this smiling business – he was in fine form this morning! 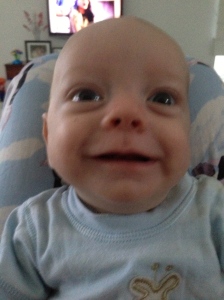 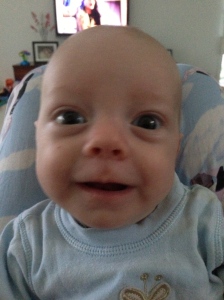 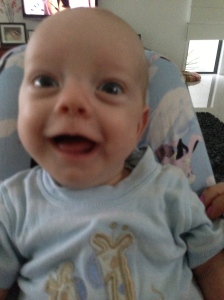 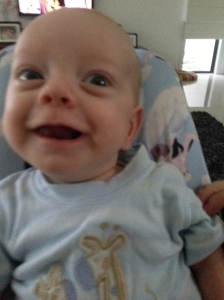 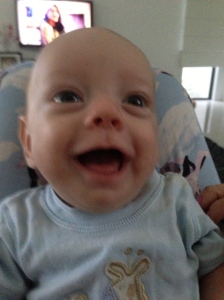 Apologies for the poor photography, I was too busy trying to capture his cute grin.

What makes your heart melt?

Looking at my now almost 20 month old toddler, I’m reminded at how quickly the time passes and how we can get so caught up in life that we don’t appreciate and savour the special moments of a newborn baby.  I struggle to remember so many of the simple things when Liam was really young, as at the time I was so focused on him moving forward, whether it was with his weight gain or reaching developmental milestones.   This is why I am trying to make the time to enjoy the sweet and simple baby moments with Aiden as I know it will be all too soon and he will also be tearing around the house.  These are some of my favourites….

What other special baby memories do you have? 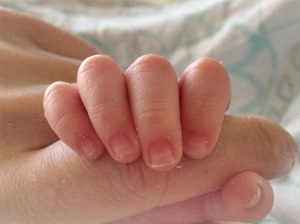 I link up with the Multitasking Mummy for Mummy Mondays