Growing up we had a huge apricot tree in our backyard.  Every summer it would be laden with fruit, which as kids we took for granted and would turn our nose up the fresh fruit -instead we found it more fun to try and hit the unripened fruit over the road with our tennis rackets… that’s another story though! When we were really young it provided shade for our cubby house, this was then replaced by a treehouse when we became older, and we used to spend hours amongst the leaves having all sorts of adventures.  A few years ago Mum told me the sad news that they were going to have to pull down the tree, whilst she had tried her best to save it through many years of drought, it had taken it’s toll.  A new one was planted in it’s place and has since started to provide us with fruit (in much smaller quantities).

Mum would spend hours in the hot kitchen making huge batches of apricot jam that we would then devour throughout the year.  I know that I am biased, but Mum’s jam is the BEST, I won’t ever buy apricot jam from the supermarket as it’s just not the same.  She even blends it for me as I don’t like it to be too lumpy!  Any time a family member is making the trip up to Brisbane, she will always check if I need any jam or sauce (her homemade sauce is awesome too).

So when I saw a recipe in my McAlpins book for Apricot biscuits, it was a no brainer that I was going to give them a go. I was quite generous with the jam, going with three tablespoons instead of the 2 teaspoons indicated.  This made my biscuits very sweet, but no too overpowering.  You could certainly taste the apricot in them – which can never be a bad thing.  They were quite flat, maybe this was because of my changes to the recipe, but they still tasted nice.  For half of the batch, I added 1/4 cup of coconut which I thought really went well with the apricot flavour.  Overall they did taste good, I probably wouldn’t make them again, but I did enjoy the trip down memory lane. 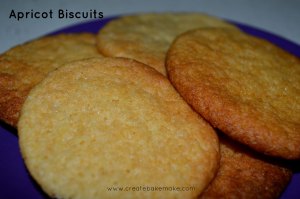 * Cream butter and sugar together, add egg and then jam and mix well

* Drop onto a greased tray using a teaspoon, allowing room to spread

* Bake in a moderate oven for 7 minutes, or until golden.

* Allow to cool on tray for 5 minutes before transferring to a wire rack.